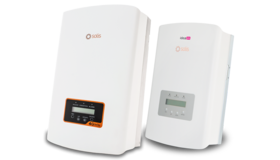 Inverter - this is one the most important and integral parts of the system components in a solar power system.
The inverter is designed to transform the direct current generated solar panels into alternating. It is the heart of solar power system.

From a wide variety of types of inverters, select the equipment that is right for your case. As a rule, by the manufacturer indicating the power in volt-amperes, since this parameter is much higher than the power in Watt (20 - 30%). As may be differences in the output signal, the load compensation circuit solutions, etc. There are inverters with built-in charger from the mains. There may be inverters for solar panels capable of directing the resulting solar energy in the urban network (the cost of electricity generated by the green tariff).

High-quality inverter should produce a pure sine wave signal having a distortion of less than 3%, while the amplitude of the voltage value does not change when the load of more than 10%. In addition, the inverter has to carry out two transformations (DC, AC), to avoid significant discharge of the battery, have the protective function of the circuit and the significant headroom.

Modern inverters may or may not have additional features, but keep in mind that excess functions may hinder the effective operation of the unit, as well as a significant impact on its value.

Network inverters Solis - are produced at the leading Chinese enterprise specializing in converters for SES. The production potential is 1000 MW of inverters. Experience in the market - more than 10 years and more than 300,000 installed in the world of inverters. Compact design, 2-line display, strict control of MPPT channels and a stable algorithm for working in the network favorably distinguishes the Solis series from competitors.

Series Solis has the following line of inverters: